You know that feeling you get when you eat something tasty that’s also hot?   The one where you say to yourself “MM that’s good” …… and then you feel the heat kick in……….and then increase for the next several seconds until you’re like “WOW”!     The heat that raises your pulse a bit and maybe brings a bead of sweat to your upper lip?    That feeling.  That is the feeling that I was looking for when I started growing my peppers.

When I was a kid, I helped my family take care of our garden.  As an adult, when I decided to start a garden of my own, I knew that I needed to grow some hot peppers.   But what I found was, with each passing year, I was making more space for peppers and less for other vegetables.   I ended up with over 30 types of peppers, including 10 of the hottest peppers on the planet.

This was great and had me spoiled until the winter came, and my fresh peppers were gone.    It was then that I learned how to Jar my peppers, but I had an issue.   My peppers were so hot that I wanted to add some other flavors to compliment the heat.   I experimented with many mixtures of herbs, fruits, and vegetables.    I finally settled on a couple, which were really hot (Which I love!) but also sweet and incredibly tasty.

For the past few years I have ended up with extra jars, and have given them away to friends and family.  It has been the case that everyone I have shared my peppers with has done two things.  The first has been to ask for another jar, and the second has been to ask why I don’t make them available for other people who love hot peppers.   And so “Mitch’s Murderous Peppers” was born………… 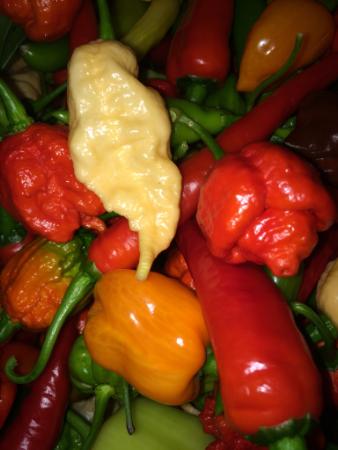